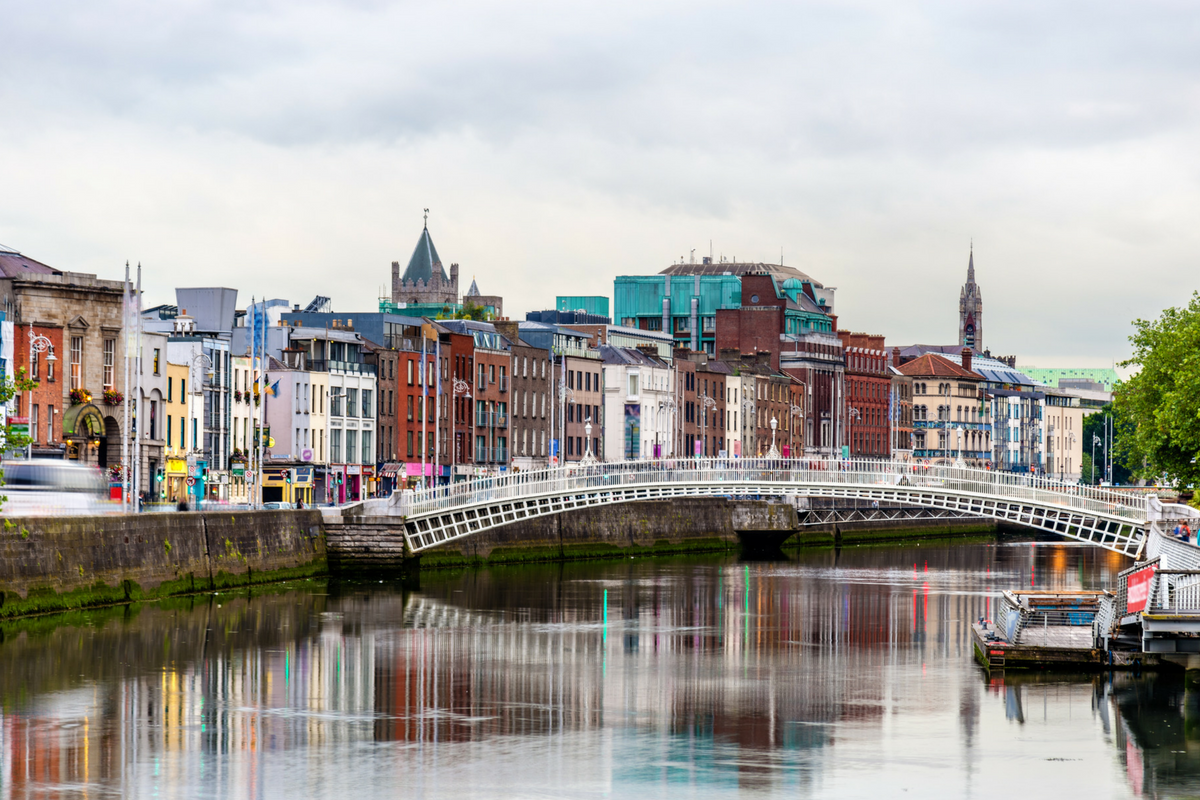 We already told you about the gems of London and Edinburgh. Now, it is time to dive into the less touristic city of Dublin. What is there to see? Where can you get a pint? If you want to know the answer to these questions, read on.

First, I want to tell you about the Kilmainham Gaol. This old prison, that used to hold people who were responsible for the Easter Rising in Ireland, became one of the most famous museums in the city. Although there were many people, who wanted to demolish it after it stopped serving as a prison, this decision was never made. All throughout the World War II and even after, the prison was just standing there, empty, without anyone taking care of it. Finally, the government decided to restorate it, due to the important role it played in Irish nationalism. That is why, today, Kilmainham Gaol is in fact a museum dedicated to Irish nationalists and the story of their movement. Very much worth seeing, if you ask me.

If you are wondering why would we input a library on the list of places to see, we get it. Normally, we wouldn’t consider a library as a top visiting spot. However, this library is one of the most interesting museums in Dublin, holding many original manuscripts, papyri and artefacts that will be thrilling for every history lover out there.
The collections that the museum holds covers for example the Ancient Egypt, first illustrated volume of “Life of a Prophet” and “Gospel of Mani”, which is believed to be the last remaining artefact of Manichaeism.

Now, moving from the history to the truly hedonistic places, let’s talk about the district of bars. There is an Irish tradition that says you always make a stop on your journey from work to drink a pint. If you want to follow that tradition or just drink a beer without any special occasion, we recommend Temple Bar. It’s not only the name of one of the most famous pubs, but also the popular name for the whole street that is filled with different drinking spots. Be careful though, the prices might surprise you with their height.
If you have a place in your heart for beautiful places to drink in, no matter the price, then we also have something for you – Church Bar. Why is it special? The name says it all, because the bar is located literally in an old church. It consists of a bar, restaurant and it is surrounded by the beautiful terraces. Truly amazing, if you ask me.

Ireland means Guinness and Guinness mean Ireland. You simply cannot go to Dublin and not visit the home of the famous beer – the Guinness Storehouse. It is a holy grail for the fans of Guinness, as it shows the visitors how the beer has developed, what’s the history of its brewing style, etc. Remember, before the Guinness has become so internationally famous, that brewery, located in Dublin, was the place to make all of the beer. Now, it is a kind of a beer museum for the fans of Guinness, located in the city centre, pretty easy to find. If this is something you would be interested in, add it to your Dublin bucket list.

If you would like to get in touch with nature, Dublin has you covered. The Phoenix Park is your go-to in that case. Why is it worth mentioning in this type of an article? Phoenix Park is almost twice as big as Central Park and also bigger than all of the parks in London gathered together. Because of its size, it can feature attractions for everyone. There are monuments for the more adult people, zoo that will be a thrill for people of all ages, public gardens, a castle, etc. Interesting fact – the park contains also of Áras an Uachtarái, the house of the Irish president. From the historical point of view, the park was firstly started in the 12th century and has been developed throughout the following years and centuries. Give yourself at least a day to get to know the Phoenix Park. And don’t miss it under any circumstances.

Going back to history, we would like to talk about the religious places of Dublin. Firstly, let’s talk about the St. Mary’s Pro-Cathedral. The “Pro” part could be confusing for you, so let me explain that for you. Roman Catholicism is a minority religion in Dublin and all of the main cathedrals are actually protestant. Because of that, St.Mary’s is a pro-cathedral, which means even though it is not a cathedral per se, it serves as one, temporarily or for a short amount of time. Here, the “short amount of time” depends on a definition, as the people started using the term “pro-cathedral” with St. Mary’s already in 1820s.
As to the church itself, its design caused a little bit of a controversy. Being a mix between Greek and Roman ancient temples, it was called ugly, to put it nicely. However, its significance for the Roman Catholic Church in Ireland cannot be denied, no matter if you like its style and layout.

The second historical church we want you to consider visiting is St. Patrick’s Cathedral. It is the main cathedral of Irish protestants. It was built in the 12th century, styled as a classic gothic cathedral. Its tower is the highest one of all Irish churches. If you are a fan of art and architecture, a trip down the memory lane of european culture in Ireland might be a good idea. An interesting fact – up until Henry VII has divided his country from the Roman Catholic Church, St. Patrick’s Cathedral was one of the Roman Catholic churches. Then, after the protestantism became the main religion, St. Patrick’s Cathedral became their significant temple. It stayed like that until today and it doesn’t seem to be changing any time soon. Like I said, if you are a fan of old architecture, you’ll enjoy the cathedrals for sure.

The last place I want to talk about is actually a small fishing village outside of Dublin. Once rural, now it is full of life with the people choosing it as the suburbs of Dublin they want to live in. It also has one of the oldest inhabited buildings in the whole country – Howth Castle. If you are more of a walk-by-the-water person, then the Bailey lighthouse should be a thing you choose to see. If you are looking for something else, there is also Ireland’s Eye, a small, uninhabited island very close to Howth. It is easily reachable by a boat, so you can easily go there with other tourists.

I hope that this little guide will help you with planning your Dublin trip. Here in Bidroom, we can also help you find your dream accommodation. Click here to search for it.