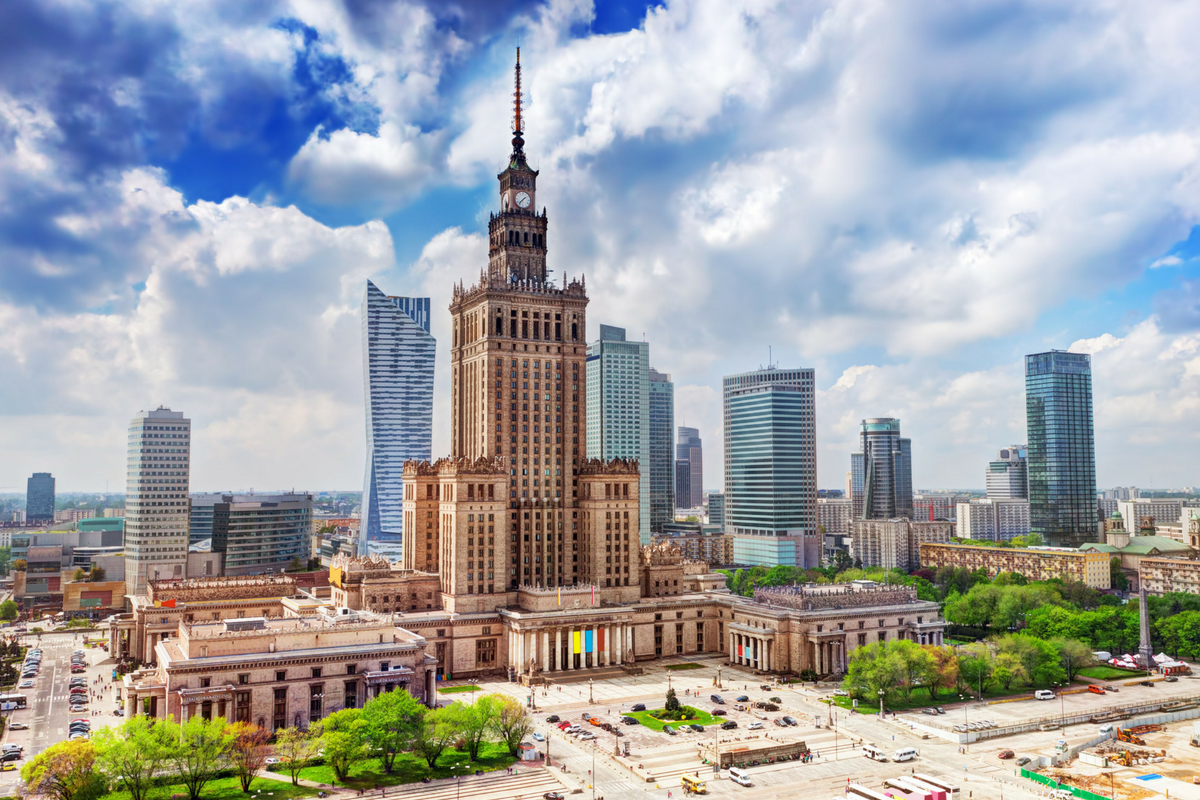 October 1944, an order has been issued to erase a city from the surface of Earth. Issuing the order was Hitler, and the city to be destroyed was Warsaw. While a large part of it was demolished, it has luckily not been erased. Today, we can say the city rose from the ashes and became one of the fastest growing cities in Europe.

World War II was by far the worst event in the history of humankind. It left many parts of the World completely devastated. One of the countries that suffered many losses was Poland. It is here, where the conflict started on September 1st, 1939. The capital of the country was a centre of many military actions as well as the resistance movement. Throughout the 6 years of war 65% of the city’s infrastructure has been demolished. Historic buildings, works of art, archives, all of that was lost for future generations. Seeing the pictures from that period makes you shiver. The city was a ruin. But looking at Warsaw today, you wouldn’t be able to tell. It got it’s second life and is using it very well.

How Did it all Unfold

It all started with the siege of Warsaw, that took place between 8th and 28th of September 1939. During that time many lives were lost and many parts of the city wrecked by bombs dropped by the Luftwaffe.

Another tragedy came in 1943. The Ghetto Uprising left the capital in devastation. The decision of the Jewish underground to demonstrate against the forces of the Third Reich was a result of the resolve to liquidate the ghetto. It was part of the plan of the extermination of European Jews. The uprising took place between 19 April and mid-May. It was the first urban uprising in the occupied Europe. Unfortunately, it did not succeed. After the uprising, the Germans razed the Warsaw ghetto to the ground. They burned and blown out all the houses in the area of the fighting. Almost nothing was left there. But the biggest blow was yet to come.

The Warsaw Uprising was military action targeted against the Germans, and politically also the USSR between 1st of August and 3rd of October 1944. It was a part of the operation “Storm” as well as the emergence of the Polish Underground State. The insurgents were hoping to defeat the Nazis before the Red Army enters the city. That would allow them to be more independent from the USSR.

But the resistance did not have the numbers and sadly didn’t receive significant help from its allies. Their territory was taken by the enemy army and in the end, the last of them had to flee to survive. The final strike fell on the Old Town, where the civilians and severely wounded insurgents were massacred.

The uprising lasted for 63 days and ended with the capitulation of the Poles. What happened afterwards is now called the Demolition of Warsaw. The enemy army would destroy and burn down the city. Between October 1944 and January 1945, they destroyed about 30% of what was left on the left bank of the Vistula river. Hundreds of priceless monuments and objects of great cultural, religious and economic value were lost. Together with the previous events it left Warsaw completely devastated. 84% of the infrastructure in the left bank and 65% of the entire area of the city was now a ruin.

Before the end of the war, all of the bridges, railway stations, passenger aircraft equipment and telephone exchanges as well as nearly all of the industrial, historic, cultural, religious, and public buildings were gone.

For a while, it felt as if the plan to remove the city from the map of Poland was a success. But somehow, thanks to the determination of its people, Warsaw rose from the ashes.

The Reconstruction of Warsaw

After the war, no one believed Warsaw could ever be restored. There were even voiced that claimed it would be better to leave it as it is. The ruins would be a unique monument of the war, reminding future generations of its monstrosity.

But the people would come to the city in hopes of bringing back its former glory. It was also important to Stalin to have bargaining chip on the upcoming conference in Yalta. The decision has been made.

But where did the money for such a project come from? The answer may be shocking, but – the people. The only sources of funding were the voluntary contributions of the citizens. The Social Fund for Reconstruction of the Capital that existed between 1945 and 1965 and collected the money for this case.

At first, Warsaw was supposed to be brought back to life in its shape from before the war. But even though the idea was noble, it was impossible to execute. Apart from places like Old Town, Nowy Świat (New World) and the Royal Castle, the majority of the city was to be modern.

The efforts of the Polish people paid off. The World admired their commitment and the work they did to restore their capital. In 1980 the Old Town of Warsaw was listed as a World Heritage Site by the UNESCO.

Despite misbelief and many obstacles, Warsaw managed to remain the capital of Poland. Not only that but today it is also the largest city in the country, in terms of both population and area.

It is a political, economic and cultural centre of the country. As a capital, it is a home to the President, the Government, and the Parliament. Warsaw is also the seat of the Frontex agency responsible for the security of the European Union’s external borders as well as the Office of Democratic Institutions and Human Rights (ODIHR). Many polish and foreign companies open their offices in the city.

The city’s landscape is now full of skyscrapers. They are the tallest buildings in Poland, with the Palace of Culture and Science at the top of the list with 237 m of altitude. The Warsaw Spire and Warsaw Trade Tower come in next. Altogether currently there are over 60 skyscrapers in the capital of Poland, and the number will grow significantly in the upcoming years. The city is a true global metropolis.

There are quite a few places in the city you cannot miss. One of them is the mentioned above Palace of Culture and Science. As a gift to the Polish people from the Soviets, it is rather controversial. But whether everybody likes it or not, it has become a symbol of the city. It is a home to museum, theatres, cinemas and universities. Many exhibitions and fairs take place inside of it. But what you simply cannot miss is visiting its observation deck on the 30th floor. It gives you a panoramic view of the city so you can truly admire how it has grown.

For a nice Sunday stroll, you can head out to the Łazienki Park. This palace and garden complex comes from the 18th century. Apart from buildings, such as the Palace on the Isle,  pavilions and sculptures, there are four gardens there, Royal, Romantic, Modernist and Chinese. It is a very peaceful and very beautiful place.

And you obviously must go to the Old Town, the oldest urban centre of the city. It has a complex of ancient architecture, mostly from the 17th and 18th centuries. The most famous part of it is the Castle Square, with the Royal Castle, the column of the king Sigismund III. 85% of the Old Town has been destroyed during the event of the war, but the Poles restored it so with such commitment, that you wouldn’t be able to tell from just walking around it.

There are hundreds of interesting sites in Warsaw. It is a vibrant, modern city with plenty to offer. We only touched the surface of what you can find there. It is inspiring how it went from ruins to the biggest city in the country and how it grew despite the odds.