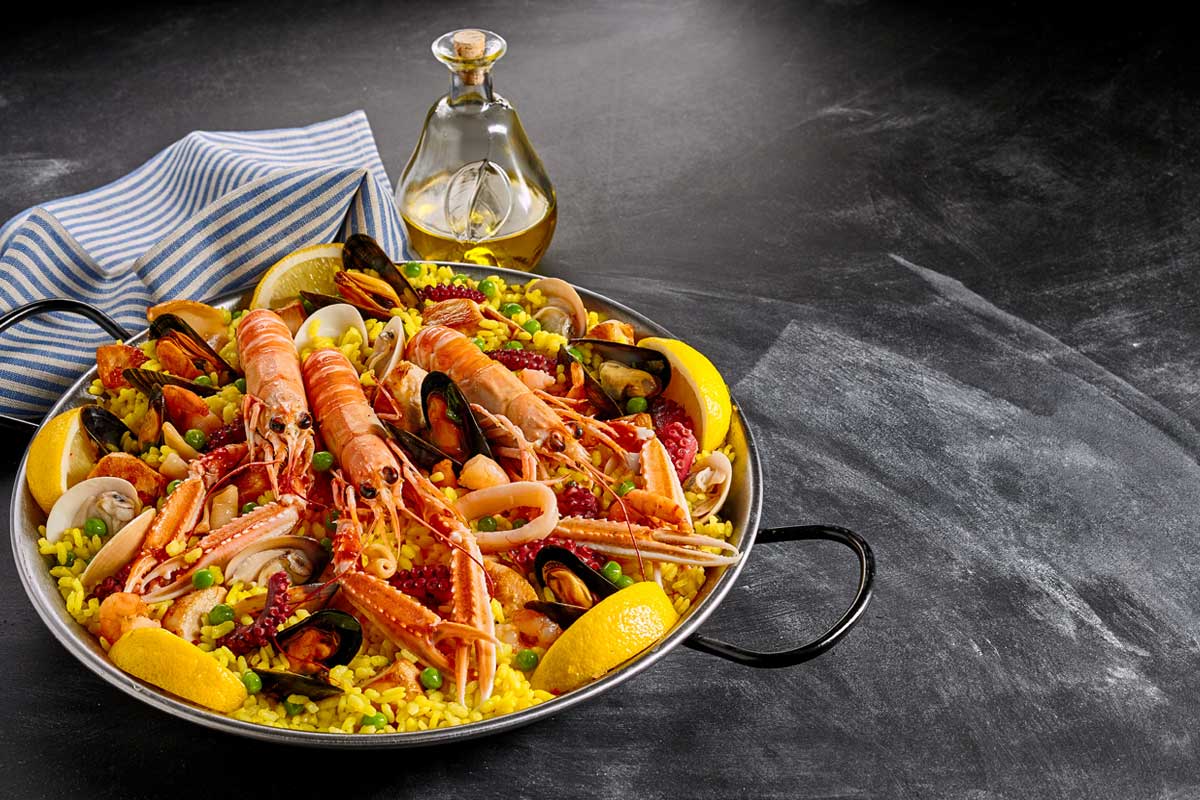 While we have already told you about Spain in terms of your travel destination, we never mentioned a different, yet just as important perspective of travelling to this beautiful country. Welcome to your own Ultimate Spanish food guide, brought to you by Bidroom.

A normal, Spanish-style day usually includes a couple of meals. Firstly, either just after waking up or before work, everyone takes a continental-style breakfast – jam, pastries, baked good and coffee. Because the break between breakfast and lunch would be too long, people often take a break around 11 am and take a snack. Lunch, usually the biggest meal of the day, consists of several courses. People start with a soup or a pasta dish, then take a salad, meat or fish dish and finish it off with a dessert. There is also la merienda, which translates to afternoon tea, and people take it around 4-5pm. The day is finished off with a dinner, starting with tapas and then followed by a larger meal. Remember though, Spanish people close their businesses for the lunch break but then continue to work until later in the evening!

Since we have talked about the meal routine in Spain, let’s focus on the Spanish food itself. First is probably the most popular Spanish dish – Paella. Whereas most people think it is a rice-based seafood meal from Spain in general, when you look at its history, it is actually a meal that originated in Valencia. There, you can find the best paella in the country. Another surprise is that paella originally does not contain any seafood, just chicken and/or rabbit meat. However, the variations with eel or seafood, in general, are also delicious, but more coastal, if you look geographically. If you are looking for an upgraded paella, try to find a restaurant that serves it with black rice – rice is actually stained by the octopus ink. We are sure the taste of origiSpanishnish paella will stay with you.

Whereas the coastal part of Spain is all about the seafood, the more central part of this country is famous for its delicious meats. When you walk into any kind of bar in Spain, you will probably see a leg of ham hanging somewhere. It is because the way of preparing ham and other meats is an actual art in Spain. Whether we are talking about the red-pepper coloured chorizo, the delicious and most luxurious meat in the country, Jamón ibérico de bellota or more internationally famous, Serrano ham. Spanish ham producers really do their best to give us the best quality of meat. We should appreciate it and eat these amazing things when we are in their country.

As you are walking through the beautiful streets of Spain, sun shining and burning, you would dream of nothing else than something cold. Well, gazpacho to the rescue. This creamy tomato soup is an excellent appetizer during a hot day. While in different countries it is included in the menus as well, nothing can beat the taste of a true Spanish tomato. Usually, gazpacho is either eaten with bread as a soup or drank straight from the bowl or a glass. Not only is it creamy, delicious and flavourful, but it is also a great solution for someone looking for something healthy in Spanish food. This soup is literally a bowl of vegetables and vitamins!

Now, moving to sweeter meals, let’s talk about torrijas. Before we tell you something more about it, we have to warn you that they are truly hard to find after the Easter season. What are they? Actually, a torrija is simply a piece of toasted bread that usually comes in two flavours, milk and cinnamon and simple syrup and wine or, the third option, they are soaked in honey. There are places that serve different flavours, for example, Seville, where you can find chocolate-covered torrijas. No matter where and which you try, we assure you that it will be a dessert to remember

Everyone knows churros. We should finish this point here, but let’s talk about it a little more. This fried dough is something ultimately not-healthy yet absolutely delicious. You probably know it from some kind of food festival in your country, but trust us when we say that the best churros are Spanish churros. What’s interesting, Spanish people never treat churros as a dessert! For them, it is more likely to be a midday snack, served of course with a cup of creamy hot chocolate. Don’t worry, we started daydreaming about them too just from writing this article.

Crema Catalana is called by people a creme brulee for poor people. It is a yolky, custardy-like creme, sprinkled with brown sugar and then torched until crisp. Usually, it will be served to you in a shallow clay dish. The flavour of Crema Catalana is so popular amongst Spanish people that you will easily find liquor and ice cream with its flavour. People that have visited Spain always warn though – be careful while eating Crema Catalana! When you taste it you might dislike all of the other desserts!

We hope that this little guide will be helpful in your Spanish food trip. Our advice – try as many Spanish meals as you can. You will not regret it and your stomach will be very happy. If you are planning to go to Spain, we might help you with accommodation! Click here to check out what we can offer you in this matter.