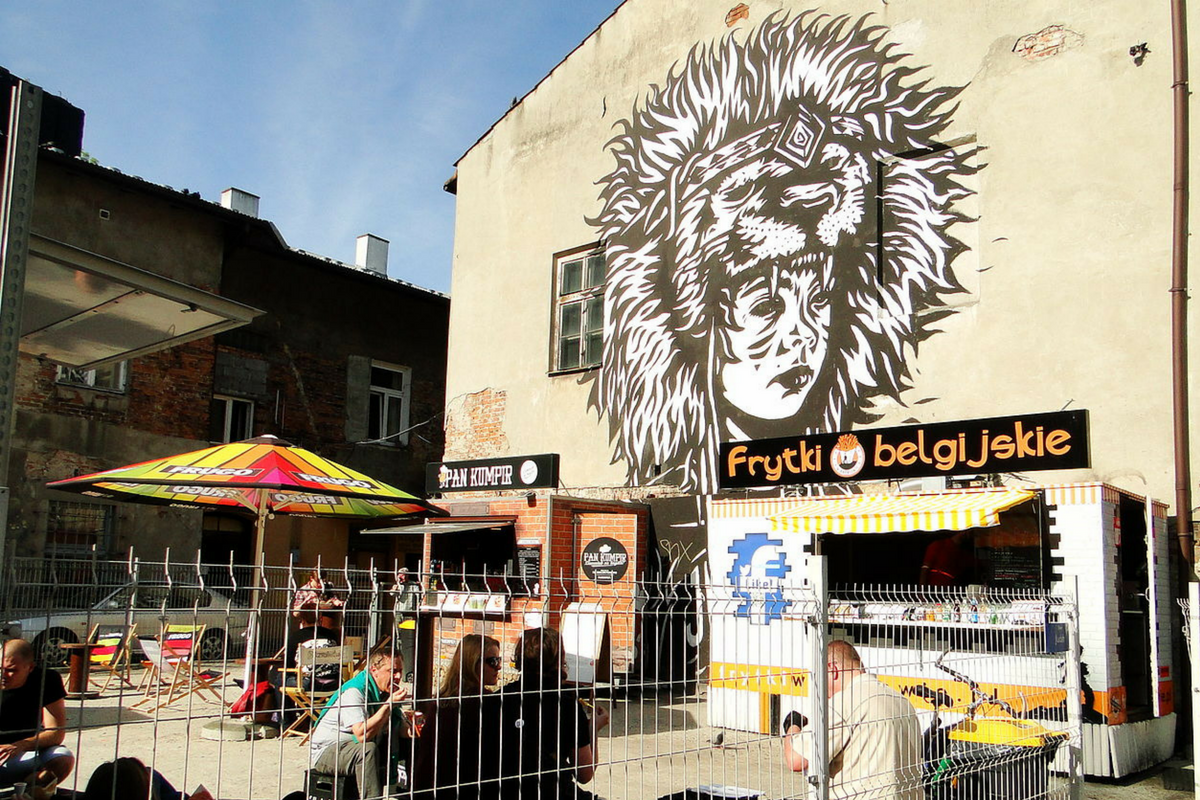 Krakow, “The City of Kings”. Once a capital of Poland, now its cultural centre, is known for the gorgeous castle, gothic and baroque churches, fascinating museums, and the 13th-century main square voted the best public space in the World. It is typically associated with old buildings and stories of the past. However, Krakow is way more than just a dream destination for the history geeks. Something many people do not expect is its vibrant street art scene.

Poland has a long history of urban art. While it once was a way to resist the government or the occupiers, it has slowly transitioned into the form of artistically expressing oneself and decorating the city space (although it still remains a way of making political statements).

Krakow may not be as well known for urban art as some of the other big cities in the country, but it is becoming increasingly more popular. In the recent years, quite a few street art projects were held in the city, such as the Kazimierz Historical Murals, the Artboom Festival and even during the Jewish Culture Festival murals were drawn. Those interested can admire the results all around the city, but mostly in the district of Kazimierz. It is the famous Jewish Quarter that has become the heart of the city when it comes to, not only graffiti, but anything different, sometimes quirky, but always special and inspiring.

If you are in the centre of the city you shouldn’t have trouble seeking them out, but we’ve decided to give you a few ideas of where to go and which of them you simply cannot miss.

There are few songs as iconic as “Singin’ in the rain”, from the outstanding musical of the same name. One of the most memorable moments of the Gene Kelly’s performance is when he famously wraps his hand around the street lamp exclaiming “I’m laughing at clouds!”. This exact scene, with another quote from the song “I’m happy again!” is portrayed on the corner of the Bożego Ciała and Meiselsa streets. It has been created in 2014 and quickly became one of the most popular graffiti in the city. We can see why, since it brings a smile to the face of anybody who sees it.

Created in 2013, during the Jewish Culture Festival, by one of the most famous Israeli graffiti artists – Pil Peled, it is one of the most thought-provoking works on our list. The young child, as the artist describes, symbolizes fear, vulnerability and how small people can be. The lion, however, means strength and will to fight. Together they represent the Jews and their struggles on the road to survival as well as the fight to keep their culture alive. Not only is it truly impressive but what makes it even more special is the fact that many regular people helped to create it. Over the years, the square by Wawrzyńca street, where it is located, became known as the “Judah square”.

Possibly the most controversial of all the street art pieces in the city. It represents the relationship of Poles with the Catholic Church. The art piece shows how important the Church became to Polish people, and how they absorb any information delivered by it. A seemingly mindless crowd with opened mouths looks at the megaphone that turns into the church bell. It is contentious but definitely interesting. It was dedicated to the Polish writer, Witold Gombrowicz.

That is the exact address of the next mural. As a part of the Kazimierz Historical Murals, it represents a few of the Poland’s historical figures, connecting history and art. The portrayed are Kazimierz the Great, one of the most appraised Polish kings, his mistress, Esterka, the local artist, Karol Knaus, the Polish American businesswoman, Helena Rubinstein, and the emperor Józef Habsburg II. The more in-depth description of each person can be found next to their portrait. It is the perfect way of learning through art.

For God’s Sake, Censorship is Everywhere

If you are staying at the Queen Boutique Hotel or the Spatz Aparthotel, you are in close proximity to this one.

This peculiar name is said to be the author’s response to the rejection of his original design. It sends a simple but very strong message, with a man’s head half-covered with a stroke of black paint. It was created by the artist ‘Pikaso’ in 2012 during the Grolsch ArtBoom festival.

This stencil of Jesus by the Children’s Hospital is one of the most meaningful works of the city’s street art. Not only the white figure, with his arms crossed at his chest, looking down with the sad face (or perhaps he’s just absorbed in his thought?) is truly majestic, but its location makes it that much more important and special.

Located at the corner of Kopernika and Blich streets, is the beautiful yet slightly frightening painting of who appears to be Jesus. The figure is saying to all those watching it “Come to me, all of you” leaving us both interested and intimidated. Its location, under the train tracks, makes it even more gloomy, while giving it a dark yet very exciting aura.

Both figures are located quite close to the city centre. Perfect for those staying in the Wyspiański Hotel or the Hotel Amadeus.

Another work created as a part of the ArtBoom festival. It is a tribute to the ‘Barcelona’ bar, that was once located inside of the building. This bar was once a Mecca for all the bohemians in the city. Now the poem of Bartolomeo Koczenasz graces its walls.

If you’re staying at or around the Mosquito Old Town Apartments, you should check out another work from the ArtBoom Festival in 2012. Its name is simply ‘Mural no. 658’ and shows a steamship with a fortressed attached to its bottom. The missiles bombard the ship from all sides. This creates a sort of dystopian image. All of that seems to be locked in a glass home-shaped aquarium. A truly interesting piece of art in the centre of the city.

The old warehouses now do not serve their old purpose and have new occupants, but the works of art on them remain intact. They show people poking around the walls. These graffiti may be slightly hidden, but worth finding. If staying at the Atrium Hotel you shouldn’t have problems finding them.

So if you don’t like to follow the beaten path, remember, that there is always more to the city than meets the eye. Krakow’s street art is the prime example of that.