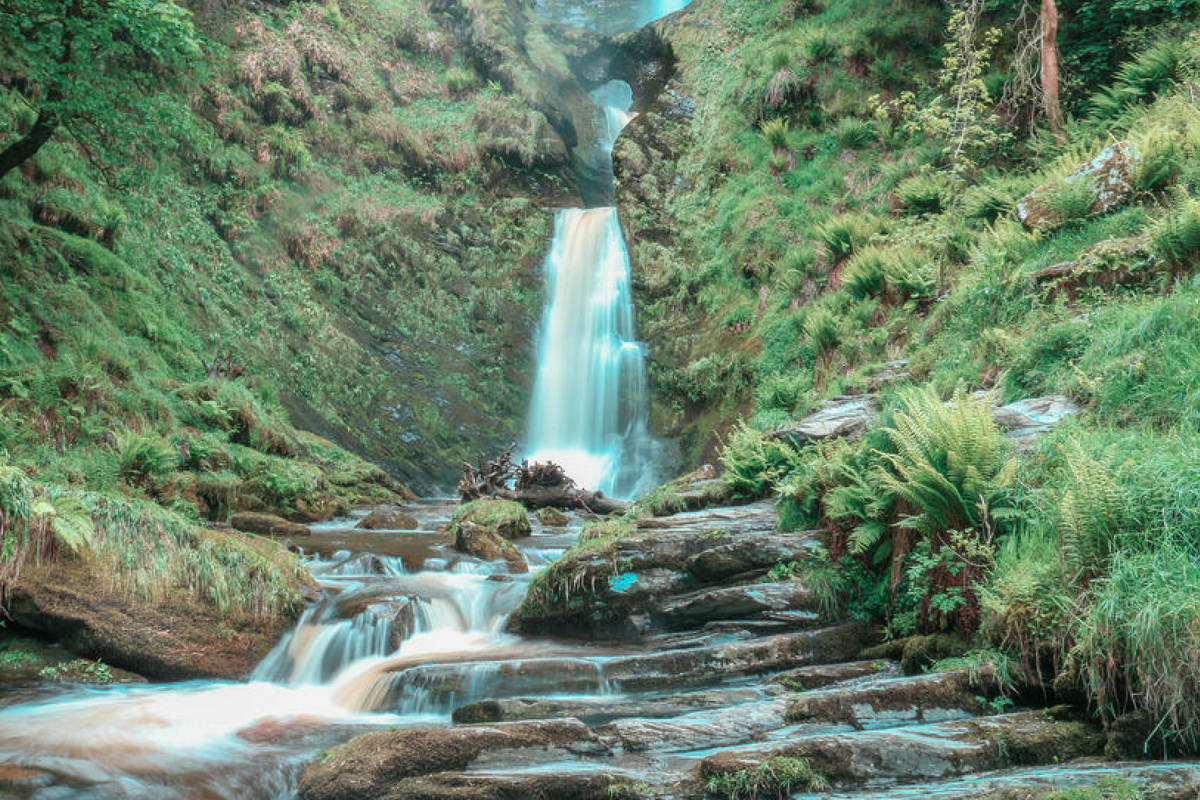 Snowdon’s mountain without its people

Today’s article, as you can probably see right now, will take on a journey to the most visiting-worthy places in Wales.

Following the order from the rhyme we showed you above, firstly let’s talk about Pistyll Rhaeadr Waterfall. It is Wales’ highest waterfall and you can find it in the northern part of the country. The waterfall takes its waters from the Berwyn Hills and then falls into the Afon Rhaeadr. Also worth mentioning? The waterfall has a naturally created arch, just in the middle of the wall. People who visit the waterfall always say it not only impresses them but also fuels them with a massive amount of good energy. We agree since we personally think that the sound of water is one of the most calming ones out there. Also, the beauty of the waterfall is so inspiring for the Welsh, that the writers even put in in their work. Example? George Borrow and his “Wild Wales”.

Located in Wrexham, the church itself is on this list mostly because of the tower. The creation of the church began in the 14th century, whereas building the tower firstly started in the 15th century. The church is richly decorated with medieval carvings, including the symbols of the church’s patron – Saint Giles. Described as “The Glory of the Marches”, the church is easily visible from each point of the Wrexham city. Why is it on the list? Well, it is for sure the largest medieval church in all of Wales. The tower itself is quite spectacular with all of the carvings and medieval decorations. Fun fact? The replica of the church is located in the Yale University campus, because the benefactor of the college, Elihu Yale, was buried in the St Giles’ Church. To remember him, the university has a replica with a transcription that also exists on his tomb.

The Snowdon Mountain is another one of Wales’ national treasures. Because of the rare flora and fauna, the mountain and the terrain around it is protected and was made a National Park. From the touristic point of view, it is definitely one of the busiest places in Wales, because the mountain gathers yearly over 500 000 people. Geographically, the Snowdon Mountain is Wales’ highest mountain. There are a couple of routes that you can choose from to reach the top of the mountain. One of them is Snowdon Mountain Railway that has been operating since 1896. So, even if you don’t like hiking, there is a way for you to easily reach the top of the mountain and enjoy the magnificent views.

The Yew Trees from Overton-on-Dee are one of the Seven Wonders as well. They are believed to be over 2000 years old. It is said that the characteristics of the tree are the reason for such a long life of theirs. The yew trees actually start growing the new roots when the old ones rot away. During its long history, these trees were the base of English army – the weapons made of the yew trees’ wood were the best and most popular for almost three hundred years! Stories tell us that Edward I ordered to plant as many yew trees as possible so that the country doesn’t run out of them. Right now, due to their old age and magnificent history, they are among the most popular visiting spots by tourists.

Another Wonder of Wales is the St Winefride’s Well. It is called “the Welsh Lourdes” and it is a well which waters have healing powers, according to the stories and beliefs. The well received the name after the legend of its powers. The story tells that Saint Winifride has been decapitated and in the place where her head fell a spring appeared. Then, her uncle has healed her and brought her back to life using the water from the spring. Since then, the well was believed to have a lot of healing powers. As a result, it became one of the more popular pilgrimage destinations.

If you are wondering why a simple bridge like this is on the list, keep in mind that the Llangollen Bridge is the first stone bridge to ever cross the River Dee. The first bridge, that has later been rebuilt and renovated, had been created under the directions of Bishop John Trevor. Throughout the years of is existence, the bridge has undergone many renovations, mostly to adapt to the changes in transportation. Right now, the bridge is the most impressive with the high waters of the river. That’s the time when the white water break through the rocks above the bridge. The view of that is breathtaking.

The last wonder of Wales, at least from the traditional poem, are the Gresford Bells. Located in the tower of the All Saints’ Church is Gresford, they have been ringing for the church services since the 18th century. Even though the bells are the only thing on the list the whole church is worth visiting. Its size and decorations are very impressive, especially when you think that this church is over 600 years old. The bells always ring for the church services, but there is also a common tradition that they ring on 5th November – probably to remember Guy Fawkes’ plot to blow up the parliament in 1605. During World War II, the bells stopped ringing for anything else but the danger of invasion.

With that, we came to an end of the Seven Wonders of Wales. It is very surprising that the country as beautiful as this isn’t on people’s bucket lists. Personally, here in Bidroom, we think Wales is a magnificent spot for a trip. Just look at how many historical places this country has to offer!