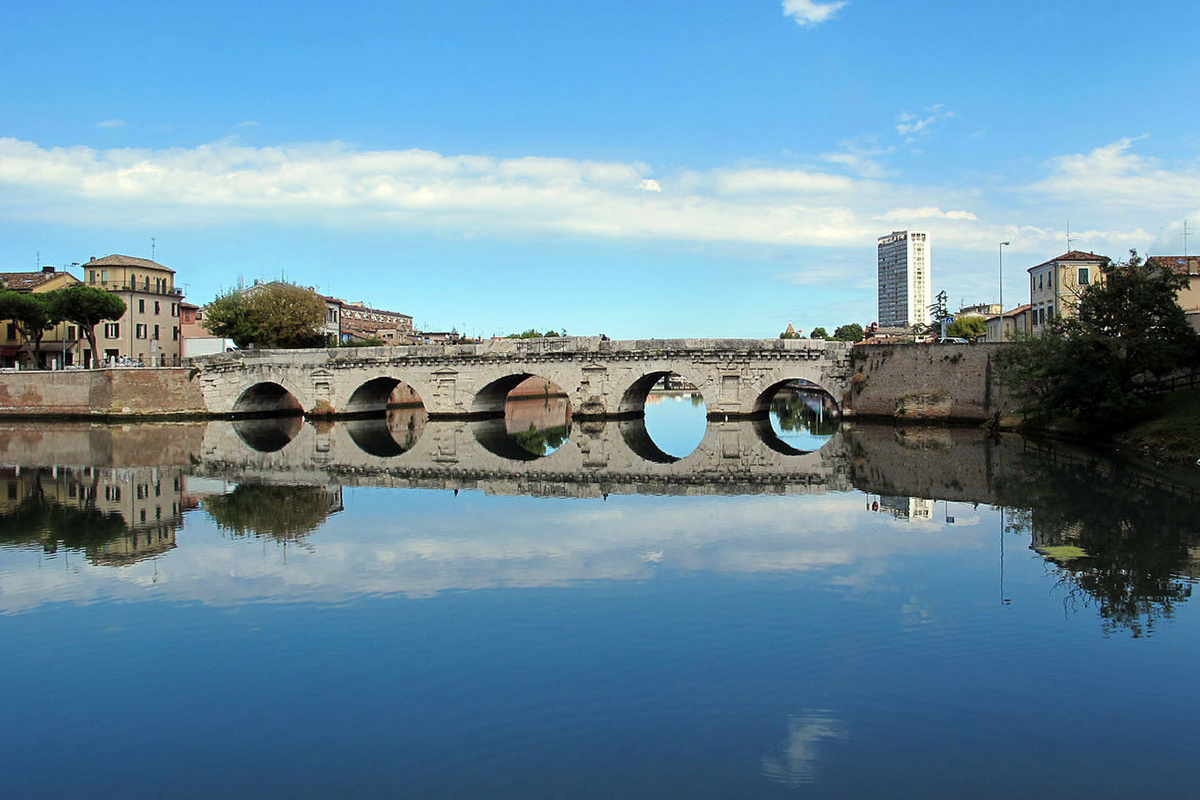 Many people associate Rimini only with its seaside resort and nightclubs. But this climatic city has so much more to offer than just the beach and the bars. Its history made it one of the most interesting places in Italy. So don’t get fooled by all the advertisements wanting you to only focus on one aspect of it. Discover true Rimini and don’t be afraid to fall in love.

Rimini is a city in the northern Italy, right above San Marino. This charming place has around 140 000 inhabitants and is the capital of the Province of Rimini. It is one of the most famous resorts in Italy, but most importantly a historic site worth visiting.

History of Rimini is not only 2000 years old, but also truly interesting. The area was technically settled by the Greeks, but it was Romans who in the 3rd century BC established a colony there. They built the base of the current day city. Many buildings erected by Romans are still standing today. The city they created was named Ariminum, thus “Rimini”.

Many of the most impressive ancient buildings were built in Ariminum. In 27 BC The Senate dedicated the triumphal arch to Emperor Augustus. The Augustus Arch is actually the oldest surviving Roman Arch in the world. In 27 AD the famous Ponte di Tiberio was completed. Made of Istrian marble, it is one of the most beautiful Roman bridges in the World.

Moreover, some of the most important events in the Italy’s history took place in the Rimini’s vicinity. In 538 it was the most vital strategic point of the country during its siege. That’s when the Byzantine army fought the Goths to take back the control over the area.

Throughout its history it was overtaken by many alien forces, to finally join the Kingdom of Italy in 1860.

It is believed, that when Julius Caesar crossed the Rubicon river, he stopped in Ariminum. It is near the city, where he addressed his troops and said the famous phrase “Alea iacta est” (“The die is cast”). Walking through Rimini you may be taking the same roads as one of the biggest rules in the World’s history.

Another important figure to visit the city was Giotto. The famous Florentine painter created one of his most crucial works, the Crucifix, inside the walls of the city.

Speaking of painters, probably the most famous of them all was yet another visitor of Ariminum. In 1502 the city hosted none other than Leonardo Da Vinci. The artist even famously wrote about the beauty of the fountain in the city centre.

Even the Italy’s most famous general, who united the country in the 19th century, Garibaldi, came to Rimini in 1859.

Rimini is a part of the Emilia-Romagna region of Italy. It lies between the River Po and the Apennine Mountains. Due to the coastal climate, the region is very rich and enjoys all the benefits of the wonderful weather it experiences through the majority of the year.

Since it lays between the mountains and the sea it offers a big diversity not only of its flora but simply of the views one can experience. This region has it all. The wonderful beaches and resorts, interesting cities, such as Rimini itself, as well as incredible landscapes of the Apennines.

When visiting the city for a longer period of time it is worth it to take a few days to explore its surroundings.

What To See in Rimini

When in Rimini there are a few things you simply cannot miss. Possibly the most popular place in town is the Piazza Tre Martiri. The main square was once the forum area of Ariminum. Many believe, that that’s where Ceasar held his famous speech. Another very important monument is the Tempio Malatestiano, a church from the 15th century. It is also one of the best preserved buildings from that era in Rimini.

When in the city you also have to visit the four boroughs (Borghi), just outside of its walls. Throughout the years they have been incorporated into the city. They have some of the most beautiful little streets in the area.

There are also plenty of wonderful sites just outside of the city. A great example is the San Leo Fortress. Its first fortifications were built by the Romans, and it grew throughout the centuries. Nowadays, it is a museum, with a massive collection of weapons.

Of course we won’t tell you to never go to the beach. But it will be much nicer to enjoy it after a long day of sightseeing.

There are hundreds of incredible places all around Rimini. All you have to do is discover them.

Bidroom at the Hospitality Day Rimini

For the first time in its history, our platform will appear at an Italian conference. 2017 Hospitality Day takes place in Rimini today, and Bidroom.com will have the honour to open the conference. Our representative delivered a wonderful speech today at 9 am, in Sala dell’Arco of Palacongressi di Rimini (Via della Fiera, 23). If you’re at the Hospitality Day come and say hi!