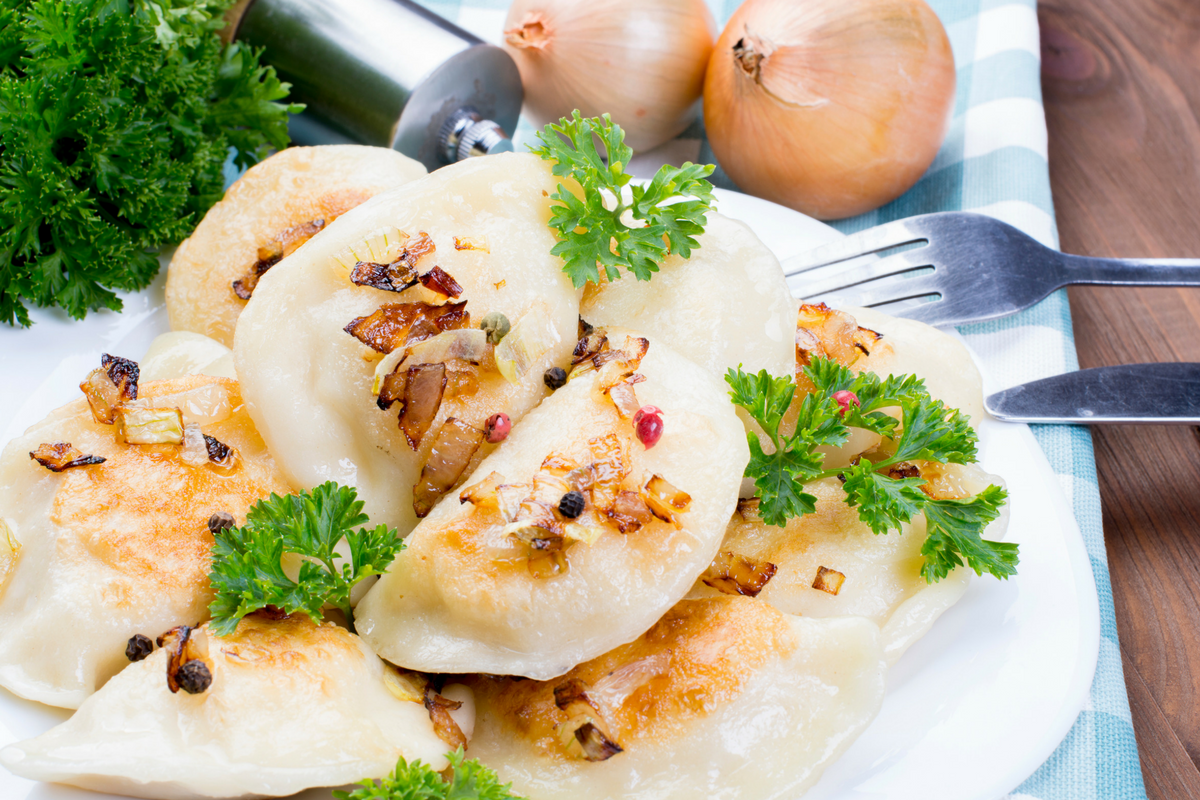 Many of you probably know the Italian, Mexican or Japanese cuisine. But there is a country in Europe (where Bidroom so happens to have an office) that also has a wide variety of delicacies to offer. Today, we will take you on a culinary trip through some of the most delicious and most popular dishes of this Eastern European country. So join us and learn more about the Polish cuisine.

Of course, we cannot talk about Polish cuisine without mentioning the ever so famous pierogi (dumplings). They are not only typical to Poland, but also to the most Slavic countries. However, they are in fact one of the dishes most associated with this one country.

Making of pierogi takes time, but it is certainly worth it. The thin, elastic and well-sticking dough is made from flour, water and eggs and fat. After the dough is ready, small, round pieces are cut out of it. Each of them is filled with around a teaspoon to a tablespoon, depending on its size, of stuffing. Later, they are all boiled in water. Some people choose to change up the traditional recipe by steaming, frying or grilling the dumplings.

And what is the typical filling for Polish pierogi? The most popular one is made out of mashed potatoes and cheese, but many other varieties can find their place on Polish tables. Some are sour, with mushrooms, cabbage or meat. Some are sweet, with strawberries, blueberries or even bananas. They are all, however, absolutely delicious.

One dish that divides the nation is bigos or hunter’s stew. Some love it, some hate it, calling it a “leftover meal”. But whatever your feelings towards it are, you can’t deny its popularity. Some people dislike it because it is often made of what was left from the previous meals. Not always though, of course. It is full of flavour, fairly easy to make and undeniably a part of the tradition.

Bigos is a combination of finely chopped meat, sauerkraut and fresh cabbage. All the ingredients are stewed together. It most commonly comes with bread.

The One Salad to Rule Them All

If you come from a Slavic country you most likely know The Salad. The vegetable salad with mayo, that takes the central place on the tables in this part of the World on most major holidays. Whether it is Easter, or you are all sitting down to the Christmas breakfast, or in fact, at any other family gathering, you can be sure to find it among other dishes.

So, what is this famous side dish? Making it takes some time, but it is actually as simple as it gets. And when done properly it truly does taste delicious. You mix boiled vegetables such as carrots, peas, potatoes and celery with onions, pickles, corn and hard-boiled eggs. To all the veggies you add mayonnaise, salt and pepper. And that’s it. Of course, there are many variations of the salad, but we enjoy it most when it is kept simple.

Not many of you would probably decide to eat a pigeon. But what if I told you, that it is not what it seems? Polish “gołąbki” are in fact cabbage rolls. Sounds better? Let’s learn more.

Once again it is not solely a Polish dish. It is known in many places around the World, such as the Eastern Europe and even Iran. In Poland, you can find it almost all over the country.

Classic, homemade gołąbki are cabbage stuffed with minced meat and rice. It is rather simple, but truly delicious. You can serve them on their own, but they taste best with either aromatic tomato sauce or mushroom sauce.

Christmas Eve wouldn’t be complete without this flavourful soup. Made out of… you guessed it – beetroot, it is full of aromas and can be as delicate or as strong as you want it to be. You can even buy the ready-made mix and simply add water to it. But it tastes best when made from scratch. The key to this soup is adding enough spices, so don’t forget the pepper and of course the bay leaf.

Once the soup is ready, it is time for getting creative. Some people eat it on its own. Some simply add potatoes to it and call it quits. But we like it most with either uszka or krokiety. Now, what are those? Uszka, or “ears” are small dumplings filled with either mushrooms or meat. Krokiety are crepes covered in breadcrumbs and filled with meat or cabbage. The former tastes best inside the soup, while the latter is ideal for dipping.

Another traditional soup is Żurek. It is essentially an acidified flour soup. Sounds weird, but stick with me on this one. The soup is made of sourdough rye flour with a characteristic sour taste.

The soup has a very strong flavour but is truly delicious and very common in Poland. It is usually served with white sausage and eggs. Of course, everyone has a way of eating it. Some prefer it with potatoes or even mushrooms.

This speciality of regional Polish cuisine is also famous in Belarus, Slovakia and Czech Republic. It is usually served during Easter, but often also the Christmas Eve.

And for a desert? Why not try the traditional poppy seed pie? This traditional cake with poppy seeds is baked mainly for Christmas Eve. They may have the form of strudel (poppy-seed cake) from yeast dough or be formed in the shape of a star with poppy seed filling. Some are dusted with sugar, some have custard on top. Many people choose to add various other seeds, nuts and dried fruit inside to make it even more flavourful. But as always, we like it best in its most simple form.

All that is just a fraction of what this amazing country has to offer to all the foodies out there. So make sure to opt for restaurants offering traditional Polish cuisine when visiting it!